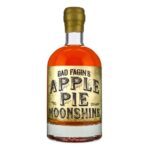 Goes down far too well as a shooter… For a long drink we recommend ginger beer and a squeeze of fresh lime.