The Isle of Jura distillery was founded by the Laird of Jura, Archibald Campbell in 1810. After the building fell into disrepair twice, 2 architects decided to club together in 1963 to rebuild the distillery back to it’s former glory. The renovation even included the installation of taller stills which allows the distillers to create a mix of malts. A majority of the ageing process is performed in American white oak bourbon casks followed by a finishing period in Oloroso sherry casks before being bottled at 40%. The final result brings honeyed barley on the nose with waves of fragrant wood smoke. On the tongue is a subtle, oily spice with earthy vanilla and chocolate raisins, finished off with some well rounded smokiness. 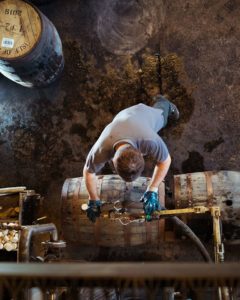